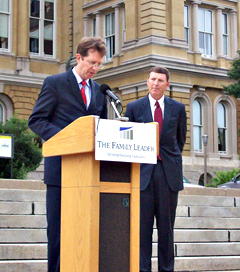 The Family Leader, a conservative group that has campaigned against gay marriage, is sending a document to Republican presidential candidates and to President Obama, asking them to sign “The Marriage Vow.”

The candidates who sign it, and return it by the group’s August 1, deadline, will be promising not only to be a “vigorous” opponent of gay marriage, but to be faithful to their own spouse.

Bob Vander Plaats, president of The Family Leader, says the erosion of marriage hits at the foundation of our society.

Chuck Hurley is president of the Iowa Family Policy Center which is part of The Family Leader group. Hurley says the institution of marriage is in “great crisis” and it’s not just because of the advent of legalized gay marriage in places like Iowa and New York.

“We acknowledge and regret the widespread hypocrisy of many who say they defend marriage, but turn a blind eye to the epidemic of infidelity,” Hurley says, “and the anemic condition of marriages in their own communities.”

Point number one in the group’s “The Marriage Vow” calls on each of the candidates to promise “personal fidelity” to their spouse, but Vander Plaats says that’s not a knock against Republican presidential candidate Newt Gingrich who has acknowledged infidelities in the past.

“What we recognize as an organization and what we recognize as people of faith is that we all fall short,” Vander Plaats says. “I’m sure there’s plenty of things in my past that people could beat me up for or hold me account to, but what we’re sayibng is let’s move forward. You’re looking to be president of the United States. Let’s show a personal committment to personal fidelity.”

The group’s “Marriage Vow”  addresses a variety of issues, from the corrosive effects of pornography on marriages to the benefits of “robust childbearing and reproduction.”