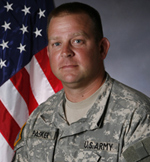 The Iowa National Guard says a soldier from Cedar Rapids died and one from Marshalltown was wounded in an attack on Saturday by an Afghan National Directorate security officer.

Guard spokesman, Colonel Greg Hapgood says the soldiers were on a patrol near the Panjshir Province of Afghanistan around 9:30 A.M. local time.Hapgood says the attack happened at a kind of “impromptu check point” in the roadway. 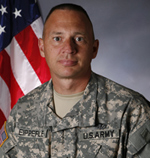 He says Master Sergeant Todd Eipperle of Marshalltown was in one vehicle that passed through the check point, and then a second vehicle approached and the Afghan security officer came into the roadway, stopped the vehicle and shot and killed 39-year-old Sergeant First Class Terry Pasker of Cedar Rapids, and a civilian contractor who was riding with Pasker.

Hapgood says the Afghan officer was shot to death by the other Iowa soldier after killing Pasker. He says Sergeant Eipperle saw what was going on and jump out of his vehicle and engaged and killed the security officer and was wounded in the gunfight.

Eipperle is undergoing treatment in Afghanistan. Hapgood says a condition report on Eipperle is not available. He says they are still investigating the shooting to try and determine what prompted the Afghan security officer to kill Pasker. Hapgood says the Iowa soldiers were driving armored trucks at the time, and being stopped by an Afghan security officer would be something that is unusual.. 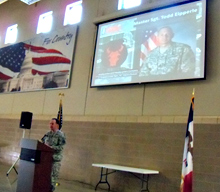 Hapgood says they were near a reconstruction site and the soldiers were there to see the site, and it was very routine for them to be there. He says it is not unusual to have an Afghan security officer in the vicinity.

Pasker was a contractor in his civilian life and was involved in reconstruction projects as part of his duties with the Iowa National guard.

Both Pasker and Eipperle were members of the 334th Brigade Support Battalion of the Second Brigade Combat team of the 34th Infantry division.

Pasker was born in Anamosa and graduated from Lisbon High School in 1990. He joined the U.S. Army in 1990 and then joined the Iowa National Guard in 1995. Sergeant Michael Gronewold served with Pasker and was his friend.

Gronewold says Pasker was a hard worker with a construction mentality, who was also very religious, and knew how to take care of his soldiers. Gronewold says Pasker had been married five years ago and planned to retire early next year and start a family. Gronewold did not deploy with his unit after suffering an injury during training. He has lost fellow soldiers before and says it is not easy.

Gronewold says it was a shock to hear about his friend, as you never get used to learning that someone has been killed. Pasker is the fourth Iowa guard soldier to die in Afghanistan this year. Colonel Hapgood says his death comes as the year-long deployment for the 2,800 Iowa soldiers is about to end.

“It’s certainly not the way that you want to end up a tour,” Hapgood says. It says it has been a marathon in the last year to year-and-a-half as the soldiers prepared and then deployed for the mission. He says it does put a damper on some of the joy that guardmembers will feel as they return to Iowa.

Funeral arrangements for Pasker are pending.

Photos of Pasker and Eipperle provided by the Iowa National Guard.