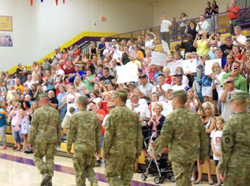 Some 50 soldiers from Company B of the Second Brigade of the 24th Infantry marched into the Johnston High School gym to bring their deployment to an end. 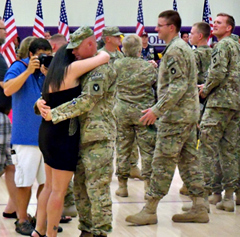 Soldiers are dismissed and look for family members.

Jones says it is heartwarming to see so many family, friends and employers there to welcome home the soldiers. “This is a great testimony to your carrying and support for these soldiers, and the sacrifices they have made for each of us,” Jones said.

Lieutenant Colonel Doug Rossell spoke directly to the soldiers. Rossell called the day a milestone and the culmination of a deployment into a “hostile theater against a determined, resistant and tough enemy.” He says today marks the beginning of a second mission to return the soldiers to the ones who care for them the most. Rossell thank the soldiers for their effort.

“Today as we repay your contributions, we do this by returning you to your family and friends, and we do so with the acknowledgment that nothing will replace the time taken from your lives to support the national interest,” Rossell said,”You put your lives on hold and at risk upholding the honor and integrity of the profession of arms and citizens soldiers. Your service, your sacrifice as you have heard many times and in many forums, reflect great credit upon yourselves, your unit, the Iowa National Guard and the United States Army.”

The ceremony ended with soldiers being dismissed from their formation. The soldiers were part of an intelligence unit that compiled intelligence reports and also flew unmanned aircraft.

Today’s are the first of some 30 homecoming ceremonies for the 2,800 Iowa troops sent to Afghanistan last October.