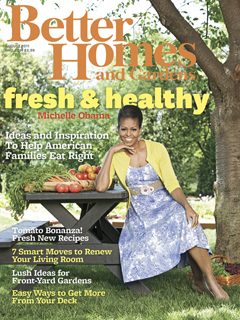 A magazine published in Iowa will feature First Lady Michelle Obama on the cover of it’s August issue. Better Homes and Gardens Executive Editor Kitty Morgan says it’s the first time in decades that a public figure will appear on the magazine’s cover.

“About 50 years ago we had a spate of covers of some movie celebrities…but in the decades since, no, we have not had such a well known person on our cover,” Morgan said. Better Homes and Gardens is published by Meredith Corporation in Des Moines. The company reports the magazine reaches close to 40 million readers every month.

Recent issues of Better Homes and Gardens have featured articles about healthy eating and growing your own food. “Since we’ve been doing the set of stories, we looked at who currently is probably the most visible spokesperson and is the most involved at a very high public level with those issues – and that’s Michelle Obama,” Morgan said.

The First Lady developed the Let’s Move campaign, which is designed to fight the problem of childhood obesity. Morgan interviewed Michelle Obama about the initiative and her decision to create a White House garden. She also listened as Mrs. Obama talked about healthy eating habits with a group of fifth graders from Washington, D.C.

“And then we threw a picnic for the kids,” Morgan said. “Mrs. Obama had a real lively discussion with them while we photographed the party.” The picnic featured vegetables grown in the White House Garden. The August issue of Better Homes and Gardens will hit newsstands July 19. To accompany the cover story, the magazine has launched a variety of online tools to help readers lead healthier lives. One of those tools involves a “Veggie Love Cookbook” app for the iPad.