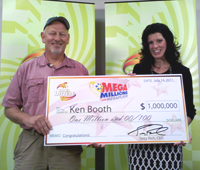 The 54-year-old Booth learned he was holding the winning ticket Wednesday and he kept the ticket close by — to make sure it wasn’t lost.

“My wife was gone, so I kept it under her pillow,” Booth said. “I had to spend the night with the ticket instead of the wife. I woke up a couple times in the middle of the night to make sure it was there. It was kind of a sleepless night, but I made it through.” Booth says, for now, he has no plans for major purchases with the newfound fortune.

“Well, I sleep with my accountant, so it’ll go to good use,” Booth said. “His wife…the accountant,” Iowa Lottery spokesperson Mary Neubauer pointed out. “Oh yes, my wife is an accountant. She’ll take good care it, I’m sure,” Booth said.

Booth’s wife, Julie, works for Rockwell Collins and is on a business trip to England. After taxes, the couple will collect $700,000 in cash. Booth says he does expect some of the dough will put toward a winter-time vacation.

“I’m not a winter person. I’ve found that warmer weather is nicer to spend time in, so I’ll probably do that,” Booth said. The winning ticket was purchased at a Casey’s General Store in Cedar Rapids (at 3625 Edgewood Road SW). Booth – who works for a mechanical contractor – says he already had planned to retire next year, so his lottery prize will make retirement that much more secure.

“I’ll probably cut down on the work and the people at work will probably say ‘you can’t cut down much more,’ but we’ll work on getting into that retirement mode,” Booth said. It marks the sixth time this year that a lottery prize of at least $1 million has been collected in Iowa. Booth is the third recent $1 million prize winner in the Cedar Rapids area.