You are here: Home / Crime / Courts / Parole board says no reduction for Tracey Dyess 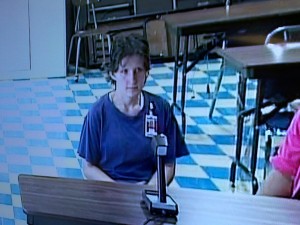 A woman who killed her younger brother and sister in a house fire went before the Iowa Board of Parole this morning asking that her 45 year prison sentence be reduced. Tracey Dyess was 17 at the time she set her home ablaze in Griswold. She told investigators the fire was intended to kill her abusive stepfather, but instead her siblings were killed.

She took a plea bargain in 2005 that makes her eligible for parole in 2022. “I know I took the plea deal and I know that what I did was wrong,” Dyess told the Parole Board. “I know I killed two innocent people and tried to kill more. I understand I need to be punished for it and I think I already have and I’m going to pay for it the rest of my life.”

Dyess’ mother and her stepfather, Brian Street, escaped the fire. Street was sentenced to 30 years in prison in 2007 for sexually abusing Dyess and her 13-year-old sister, Jessica. Dyess told board members she’d like to be released from prison before her sentence is up in 2035.

“I’m not saying I want out now, but maybe before my mandatory (sentence) is up,” Dyess said. “I did try and kill everyone in the house that night and I realize this and my brother and sister died.” Parole board members told Dyess they would NOT recommend Governor Branstad commute her sentence.

Board chair Elizabeth Robinson noted Dyess agreed to the plea bargain and the 45 year prison sentence. “I’ve read your file front and back and the DCI report and you had a horrible life. You…were a victim, but one crime cannot be committed to cover another crime. That’s where you went wrong,” Robinson said. “You lived right across the street from the sheriff. There were plenty of people you could’ve gone to for help.”

Board members said they were also troubled by the fact that Dyess poured gasoline around the entire house, including an area near a couch where her sister was sleeping. Dyess said she didn’t intend to kill her siblings. “That night, when I poured the gasoline, I wasn’t thinking about where I poured it. I just poured it and got anything I could because I was tired of all of it and just wanted it all to end. When I poured it that night, I wasn’t thinking about them,” Dyess said.

One parole board member asked Dyess what she would say to her sister and brother if she could speak to them today. “The only thing that I could think to say is that I’m sorry. I don’t know what I could say, I mean, there’s a lot that I’d like to say and a lot of regrets that I have. I don’t know,” Dyess concluded. She spoke to the Parole Board, gathered in Des Moines, via a video feed from the Iowa Correctional Institution for Women in Mitchellville.

Parole Board member Thomas Phillips wasn’t swayed by Dyess’ arguments for early release. “In my opinion, you seem to have little remorse in what crimes you committed,” Phillips said. “I think to say simply ‘I’m sorry’ or ‘I don’t know what I would say to those individuals,’ I think personally does not show remorse.”

James Felker, another Parole Board member, agreed with Phillips. “I’m not impressed by statements on your part that you feel you’ve served enough time,” Felker told Dyess.”You don’t seem to be very remorseful, so therefore, my vote is no.” Dyess is now 24-years-old. Kaleb, the six-year-old boy she refers to as her brother, was actually her nephew.

Dyess told board members she considered Kaleb her brother because he was being raised by her mother.