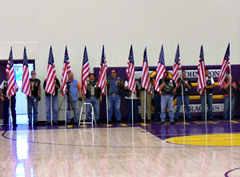 If you attend a welcome home ceremony for Iowa National Guard soldiers you’ll see procession of motorcycles leading the way.

The leather-clad riders of the motorcycles, known as the Patriot Guard, carry either the American flag or the P.O.W. flag.

Many of the members, like assistant state captain Steve Cox, are Vietnam veterans.

“One of the things that a lot of us that served in Vietnam have said as a part of this organization is ‘never again.’ Never again will we allow a generation of young people that serve our country to be treated the way that we were.,” Cox says, “One of the things that’s real important to us, is that we make sure that these young people, that they know how much we appreciate what they do.”

Jim Clark of Des Moines decided about a year ago that riding with the Patriot Guard was a way to channel his bitterness about Vietnam.

He says as a member of the Marine Corps and serving in Vietnam, he thought it was time for him to join the Patriot Guard.

The Patriot Guard was first started to counter the anti-gay protests at military funerals by the Westboro Baptist Church. It now has 100,000 members in 50 states. While most members ride motorcycles and served in the military, Cox says that isn’t required.

Cox says anybody can join, you don’t have to have bike or be a veteran. “We just ask that you come out and follow our protocol and show honor and respect for the service that the military is providing for our country,” Cox said.

The popularity of the Patriot Guard has spurred the creation of similar groups, such as the AMVETS Riders in Evansdale. Northeast Iowa Post 31 recently became the third in the state to receive a national charter for the motorcycle group. Vietnam vet Jerry Holtzmann is the group’s president.

Holtzmann says when he and others came back to Iowa, it was just another day and there was no welcome. The AMVETS and Patriot Guard riders will be busy in the next several weeks as some 30 welcome home ceremonies are planned for Iowa National Guard soldiers returning form Afghanistan.

That includes a ceremony today at 11:30 in Cedar Falls at the UNI-Dome. Some 105 members of the Headquarters and Headquarters Company, First Battalion, 133rd Infantry, Second Brigade Combat Team, 34th Infantry Division are returning home.

There is another ceremony Sunday 11 a.m. in Dubuque for 220 soldiers of Companies A and D, First Battalion, 133rd Infantry, Second Brigade Combat Team, 34th Infantry Division. The event will be held at the Grand River Center.