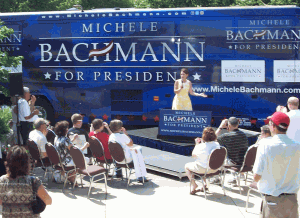 Republican presidential candidate Michele Bachmann spoke to about 100 Ames-area residents this afternoon, about a mile from where the Iowa Republican Party’s Straw Poll will be staged on August 13.

Bachmann has said the only way she would vote to raise the so-called “debt ceiling” is if the deal also subtracted any money set aside to implement the health care reform legislation President Obama signed into law last year.

The crowd was standing outdoors in oppressive, 98-degree heat that “felt like” 115 degrees. Plastic cups stacked on a water table melted, even though the table was in the shade.

“There’s so much more I would like to say,” Bachmann said. “I’m a little worried, though, about the sun that’s coming down right now.”

Bachmann retreated, along with most of the crowd, to the shade of nearby trees where people waited to get an autograph or have a photo taken with the candidate. Bachmann kicked off her shoes and stood in her bare feet on the grass for about half an hour, talking with the crowd.

Bachmann called Ames “ground zero” for her campaign as it gears up for the Ames Straw Poll. Members of her campaign staff circulated through the crowd after the speech, using iPads to record contact information from people who indicated they would attend the event.

Bachmann is due in western Iowa Monday to talk about Missouri River flooding.  She’ll hold a news conference with Congressman Steve King at the Omaha airport.  Bachmann campaigned in Iowa on Saturday and today, including a Sunday morning address to an Evangelical Christian congregation in Des Moines.

Read and hear more about Bachmann’s stop in Ames.