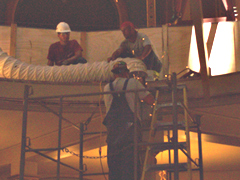 Sparks fly as work is underway on a ceiling for the captiol rotunda.

A shipment of huge glass panels made in Florida arrived at the Iowa capitol today , panels that will be installed to close a massive hole between the ground floor from the first floor.

The statehouse rotunda has featured a wide open space in the center that stretches 219 feet from the bottom floor all the way up to the dome.

The waist-high brass rails surrounding that open space have been removed on the first floor so 19,000 pounds of glass panels can be installed in that space.

It will create a 415-square-foot glass ceiling for the ground floor, while on the first floor there will be a round section of glass on which people can walk.

Mark Willemssen, facilities manager for the Iowa General Assembly, watched as a pulley system and an I-beam were installed this morning to put the glass panels in place.

Joan Arnett, supervisor of the capitol tour guides and the resident statehouse historian, was on hand, too, taking pictures. There used to be a glass floor in the space, but it was removed nearly a century ago.

“The records say it was taken out to let light and air in downstairs, but at that point the building would have had electric lights and I’m don’t know how much that would have made a difference on the interior,” Arnett said. “But I’m sure that it did allow a lot of air to fall down into this area, especially in the wintertime.”

Heating and cooling the massive statehouse is still a problem according to Willemssen and filling that open space with glass may help reduce utility bills for the statehouse.

“It should help us with the cooling and heating,” Willemssen said. “It’ll stop that chimney effect here on the ground floor, especially during the (legislative) session days when we have a lot of people coming in these ground floor doors, you get all that cold air rushing in with them and (the new glass floor) should stop a lot of that.”

Larson & Larson, an Iowa contractor, is handling the installation. Circle Redmont is the Florida company that made the glass panels.  The project should take two to three weeks according to a spokesman for the Iowa Department of Administrative Services.