You are here: Home / Crime / Courts / Congressman Boswell talks about the intruder at his farmhouse (audio)

Congressman Leonard Boswell held a news conference at the statehouse this afternoon, revealing more details about a weekend incident at his farmhouse in southern Iowa.

“We are thankful that nobody was killed or permanently injured and (it was) a pretty tough situation,” Boswell said. “I hope none of you ever, ever have to endure it.”

Boswell said an armed intruder entered the home at about 10:45 Saturday night and confronted his daughter.

“I was certainly reacting as a father,” Boswell said. “That was my daughter. This guy had a hand on her throat and a gun in her face and if he was going to shoot somebody, I’d prefer he shoot me and so I went after him.” 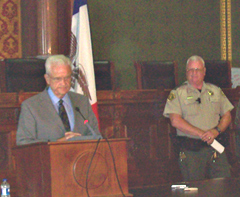 Boswell, who is 77 years old, wrestled with the man, who he said was wearing a ski mask and demanding money.  “That was my daughter, so I did probably what any other father or parent or any of you would do, I went after him,” Boswell told reporters this afternoon. “And we had quite a little experience down the stairwell and so on.”

Boswell said his doctor tells him he cracked some ribs as he rolled down the stairs with the intruder. At that point in the scuffle, Boswell’s wife emerged from a bedroom and the congressman said the intruder scrambled up to Dody Boswell, pointed the gun at his wife and again demanded money.

“And all of a sudden he let out an exclamation and there was our grandson with a shotgun about three, four, or five feet from his head,” Boswell told reporters. “He never said a word and the guy bolted out the door.”

Boswell’s 22-year-old grandson had gotten a family shotgun from a spare bedroom in another part of the house and he had to load it.  “That’s one of the reasons I’m kind of proud of him,” Boswell said. “He had the ability to be calm and get it loaded and be ready to do what he did.”

Authorities say tracking dogs followed the intruder’s scent from the farmhouse up to a nearby road. Boswell and his wife make their home at a condo in Des Moines, but still own the farmhouse, rent out the land and make frequent trips back to the farm to “check on the cows” according to the congressman.

“I spent a lot of my life there and my grandson is kind of interested in this organic farming, so we plowed him up an acre to see what he could do with it and so they’re down there quite a little bit,” Boswell said.

Authorities are asking for residents in the Lamoni area to call the local sheriff’s office if they have any tips related to this home invasion. Decatur County Sheriff Herbert Muir said his department has taken several calls about vehicles in the area.

“Where (Boswell) lives is rural. There’s only a couple of places a vehicle will come in order to get to where his residence is,” Muir said. “…I think that by the time we’re done, we’re going to end up having all of the answers.”

Muir was asked by a reporter if there already is a suspect in mind. “I don’t know. We might,” Muir said, laughing. “You’ve got to start from the beginning, thinking things, so (we) might.”

The FBI and state officials are also involved in the investigation. Boswell said he believes the man was there to “commit a robbery” and had no idea he was trying to rob a congressman.