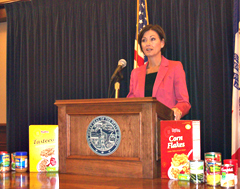 Two years ago Lieutenant Governor Kim Reynolds voted to give the state’s workers compensation commissioner a six-year term, but she now says Christopher Godfrey should resign, as Governor Branstad has demanded.

Godfrey has refused to leave his post and Branstad has cut his pay by 36-thousand dollars. Reynolds says the governor has the right to have confidence in top state administrators.

“He ran to change the direction of government.” Reynolds says, “and, in doing that, you need to make sure you have the competence in the leadership to help you obtain the goals that you have set forth.”

Reynolds was a state senator in 2009 and joined all the rest of the state senate in unanimously confirming Godfrey for a six-year term.

“At that point I didn’t have any outstanding issues or there was no reason why I would have voted against him,” Reynolds says.

But Reynolds says Godfrey is not meeting the objectives the Branstad administration has set forth in terms of workers compensation claims.

“It’s a different day. It’s two years later. We have a different agenda…Things aren’t always constant,” Reynolds says. “…The cost of business has gone up.”

Reynolds knows of no other state official who has refused to resign at the governor’s request.

Listen to Reynolds speak this morning at the Branstad Administration’sweekly news conference.  She began by praising a state employee food drive which has netted more than $89,000 in cash and food donations for the Food Bank of Iowa.

Governor Branstad is away from the statehouse to attend the funeral of a National Guard soldier in Cedar Rapids.