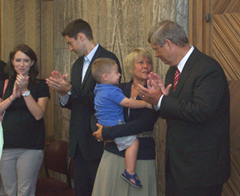 Christie Vilsack holding her grandson alongside her husband Tom.

Former First Lady Christie Vilsack formally kicked off her congressional campaign this morning with a speech to a crowd of supporters in Ames.

Vilsack will likely face Republican Congressman Steve King in the 2012 election, but she didn’t mention King at all today. Instead, she talked about her roots in Mount Pleasant, her recent travels around the new fourth congressional district and her belief that voters are fed up with the partisan rancor in Washington, D.C.

“Iowans are sick of the partisanship and finger-pointing that has poisoned our politics and blocked our progress,” Vilsack said, to applause.

“I like to say if I didn’t have Republican friends in Mount Pleasant, I wouldn’t have had many friends,” Vilsack said, and the crowd laughed along with her. “But even when we have our disagreements, we never stop talking with each other and we know it takes compromise to get things done. That’s what Iowans want and expect from our government. They want our leaders in Washington to lower their voices and raise their sights.” 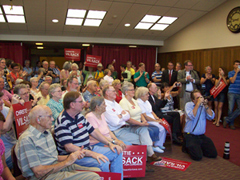 Supporters of Christie Vilsack at her campaign announcement in Ames.

While Vilsack mentioned Republicans in her hometown, she never once said the word Democrat. She also said the current federal deficit “offends” her.

“But it also offends me when some of the wealthiest people in the country and some of our most profitable corporations are not asked to pay their fair share in taxes,” Vilsack said, and as she started the next line in her speech, the audience interrupted with applause.

Vilsack then got laughs when she got to to this: “That’s like showing up at a potluck without a covered dish.”

According to Vilsack, the answer to the country’s most vexing fiscal problems won’t be solved at “the extremes.

“We can’t solve our budget problems with all cuts or all tax increases. The answer lies somewhere in the middle,” Vilsack said. ” In the midwest we know that compromise is not a bad word. We need to be finding more common ground in Washington, not less.”

Vilsack served as Iowa’s first lady for eight years. In the 2008 campaign, she endorsed Hillary Clinton’s bid for the White House and during the height of the 2010 campaign Vilsack set aside at least two days a week to campaign for Democratic candidates around the state.

This spring she embarked on a “listening tour” through the new fourth congressional district and the Vilsacks moved to a home in Ames, which is in the new district.

Vilsack’s husband, former Iowa Governor Tom Vilsack — the current U.S. Ag Secretary — was at the event, along with the couple’s two sons, a daughter-in-law and a grandchild.