You are here: Home / Politics / Govt / GOP ridicules Vilsack as liberal in hiding 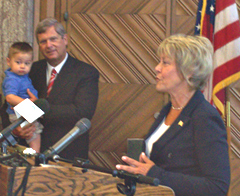 Christie Vilsack announces her candidacy as her husband and grandson look on.

The National Republican Congressional Committee has produced a video ridiculing Vilsack’s “listening tour” this past spring through the new fourth district.

“Christie Vilsack’s running all over Iowa with her little notebook, asking Iowans what’s on their mind,” the video’s narrator says, his voice dripping with sarcasm.

In late April Vilsack announced she would travel the new district to meet with voters and “find out where the middle class went and help bring it back.”

The ad pictures Vilsack as a sort of bobble head doll at one point and includes a photo of President Obama and Nancy Pelosi smiling at one another.

“Christie, you may be trying to hide your liberal agenda, but Iowans will figure it out pretty quick,” the narrator says. “Christie Vilsack? Come on.”

During a speech earlier today in Ames, Vilsack said Iowans are tired of sick of the “partisanship and finger-pointing” in Washington, and favor compromise over stalemate. And Vilsack suggested the federal government should “partner” with private businesses and individuals on a wide variety of projects, from flood relief after the Missouri River recedes to grants that help finance high-speed Internet lines in rural Iowa.

“I’m running for congress because I believe the federal government has a role in helping our communities large and small prosper,” Vilsack said. “But the role must be focused and sensible.”

Christie Vilsack will likely face Republican Congressman Steve King in 2012. She raised nearly $425,000 in the past three months, while King raised about 170,000 — more than a quarter-of-a-million dollars less than Vilsack. Republicans say King has represented half the district since 2003 and there are more Republicans in the new fourth district than any other congressional district in the state.