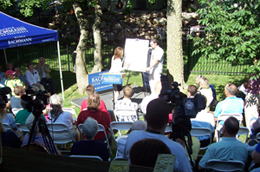 Michele Bachman talks at an event in central Iowa.

Two women who sat about 20 feet away from Bachmann say they’ll be attending the Iowa Republican Party’s Straw Poll for the first time, and they’ll likely be Bachmann supporters.

Karla Deemer of West Des Moines says she’s not been “into” politics — until this election season.

“There was kind of a point when I started seeing things go in a direction that I didn’t want to see them go. Things started impacting me personally and then that’s when you need to get involved,” Deemer says.

“We just need to get back to our good old basic values and stand behind our constitution and get back to where we need to be, and I think Michele can do that.”

Carrie Christiansen of Waukee says she likes Bachmann’s brand of conservatism. “I like her honesty,” Christiansen says. Bachmann stood in the sun behind a small lectern as the crowd sat on chairs in the shade. Bachmann staff had greeted the guests in the front driveway of the home, taking down information from those who indicated they would attend the Straw Poll.