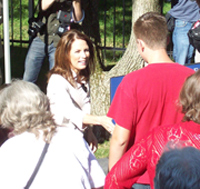 Michele Bachmann talks with a supporter.

Republican presidential candidate Michele Bachmann has briefly addressed the assertions of former staffers that she suffers from debilitating migraines.

The New York Times interviewed Bachmann’s son, who is a medical resident, who confirmed the congresswoman suffers from migraines, but he said it wouldn’t preclude her from serving as president.  Bachmann was in Norwalk this morning, where a reporter asked about her migraines.

“I gave a statement yesterday. We were voting last night in Washington, D.C.  We got here about one o’clock in the morning. I keep a very vigorous schedule. I feel great and so we’ve answered that,” Bachmann said. “What I’m here to talk about is the debt ceiling and I think it’s been very clear that the people in Iowa do not want us to continue government spending and increase the debt ceiling. Everywhere I go, this is what people are talking about. They want the economy turned around. They want job creation. That’s my focus.”

Bachmann was surrounded by reporters, cameras and microphones.  Her staff formed a human shield around her so the congresswoman could make her exit.  Bachmann is meeting privately with pastors late this morning before a noon-hour stop at a cafeteria in West Des Moines.