You are here: Home / Politics / Govt / Pawlenty: candidates must prove “they can do all the job, all the time” 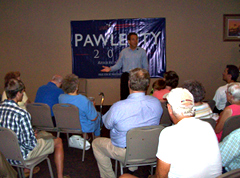 Republican presidential candidate Tim Pawlenty is touting his “come-back” record as governor of Minnesota and he’s raising new questions about whether fellow Minnesotan Michele Bachmann is fit for the presidency.

Former Bachmann staffers say she suffers from debilitating migraine headaches and has occasionally been hospitalized for treatment.  Pawlenty suggests being president is a 24/7 endeavor, and there’s really “no time off”.

“I don’t know enough about her particular medical situation to comment. I just don’t have enough facts on that  I certainly would defer to the judgement of the medical professionals,” Pawlenty told reporters in Indianola this afternoon. “But, setting that aside, all of the candidates are going to have to demonstrate they can do all of the job, all of the time.”

Pawlenty has been questioning Bachmann’s performance in congress as well, suggesting his two-term record as governor of Minnesota better prepares him for the presidency.

“As to Congresswoman Bachmann, I’ve said before and I’ll say again, her record of accomplishment in the United States congress is non-existent and I think whether it’s her or anybody else, they also have to have in these times executive experience where they’ve led a large enterprise with a public component to it under difficult circumstances and have driven and lead that organization to good and positive results,” Pawlenty said. “I’ve done that and she hasn’t and I think that is one of the minimum prerequisites for being the next president of the United States.”

Susan Geddes, a Pawlenty backer from Indianola with experience in successful legislative campaigns, is Pawlenty’s volunteer coordinator in Warren County. Geddes says she picked Pawlenty, in part, because of that executive experience.

“He’s a very humble guy,” Geddes says. “He’s not the loudest guy in the house, but he is very definite about how he handles things.”

Geddes helped organize a mid-day meeting in Indianola. Pawlenty told the crowd he had been counted out before, in his last campaign for governor. “So many times in my career people have said, ‘You know, he has no chance.’ You know, the experts have said, ‘He’s second or third tier,'” Pawlenty told reporters afterwards. “And we’ve always been able to fight back and win and we’re going to do that again.”

Pawlenty is on an 18-city tour of the state.  Late this afternoon he’ll visit a facility where an instructor teaches people how to use guns. On Saturday Pawlenty plans to attend a National Rifle Association event to stress his support of the Second Amendment.