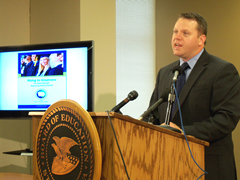 The director of the Department of Education introduced a report card today on the state education system the he says shows it needs “a major remodel.”

It’s a theme Jason Glass has used since taking over the department under the new governor. Glass told reporters Iowa hasn’t kept up with other states.

He says it is not the case that Iowa schools are worse, he says they are as good or better than they have been in the past, but he says the achievement results have stagnated or flat-line over two-decades while other states and nations have accelerated their gains.

“So we have to think about what are the whole system reforms, how do we remodel this house of education to put Iowa’s system

on par with the highest performing systems in the world,” Glass said. Glass says students in the state have not scored well on the National Assessment of Education Progress (NAEP).

Glass says Iowa students are missing the mark in math and reading competency, and says an important note in the pattern is that not only are minority and “disadvantage” students underperforming, but so are white and “relatively affluent” students. “This is significant, Iowa’s white students are underperforming their national peers, and this becomes even more troubling from an international perspective,” Glass says.

He says the state’s population has grown more diverse, with more students who don’t have English as their first language, but he says that is not the reason for the decline in achievement. “The pattern suggests that no location, city schools or rural, or single demographic group is singularly to blame for Iowa’s stagnant test scores. We have a whole system problem that will require a whole system remodel,” Glass explained.

The report card comes as Glass prepares for the governor’s education summit next week. He says there are several things they will discuss at that summit for addressing the remodeling of Iowa’s school system. “What are the expectations for students and are we measuring them in clear ways, so that is a big part of the discussion,” Glass says. Secondly he says they will talk about raising the “capacity of the educator workforce” and he says there are a number of strategies across the board for improving teacher effectiveness.

“We can’t rely on a silver bullet or drive-by approaches to that, tricks or gimmicks, we have to really think about a long term strategy for how we improve the educator workforce,” Glass said. Other points from the report card showed the achievement gap between Iowa students with and without disabilities on the 2009 NAEP assessment is the worst in the nation.

Despite Iowa’s above-average scores on the A.C.T. college entrance exam, the percentage of test-takers who met all four A.C.T. benchmarks showing they are ready for college was 30% in 2010. Iowa tied for the 16th lowest percentage of people with a bachelor’s degree (25.1%) in 2009, according to a national comparison.

You can view the report card here: www.educateiowa.gov