Pawlenty had signed a pledge saying he supports the “cut, cap and balance” plan Republicans put forward.  “So they’re going to have to think of what they’re going to do next,” Pawlenty said this afternoon. “Give them a little time to get their next plan together.”

Pawlenty played a “pick-up” game of hockey at an ice rink in suburban Des Moines early this afternoon and he spoke with reporters just after he left the ice.

“It’s gut-check time for Republicans and for the whole congress,” Pawlenty said. “But let’s remember that President Obama is the leader of our country and he needs to quit hiding and ducking and bobbing on the issues of real reform.”

Pawlenty accuses Obama of failing to explain his stand on a variety of key issues related to the debt ceiling fight. 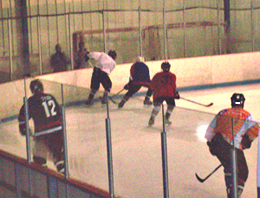 Pawlenty scored one goal during the hour-long pick-up game and admitted to falling on his backside “more than once.” Pawlenty was welcomed onto the ice by a group of kids who have been practicing hockey in the arena and the candidate popped back into their afternoon hockey-camp meeting before he left.

Pawlenty wore a campaign-themed hockey jersey with the number 12 — for 2012 — on the back, along with his nickname T-Paw. Pawlenty also picked up a “skating and puck control” DVD from one of the hockey coaches at the camp.