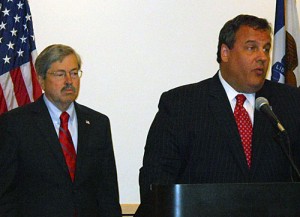 New Jersey Governor Chris Christie made a quick trip to Iowa today, touting education reform, stiff-arming speculation about his presidential aspirations and delivering a bit of snub to the candidates who are running.

Christie said he may endorse one of the GOP candidates at some point — if he feels “enthusiastic” about one of them. “I mean, you know, if I felt it right now, I’d endorse somebody,” Christie told reporters. “I don’t.”

Christie is mid-way through his second year as New Jersey’s governor. Christie has repeatedly said he’s not ready to run for president and he said late this afternoon during a news conference in Des Moines nothing had happened to change his mind.

“I’ve been encouraged by a lot of folks from around the country to reconsider my position on running for president or not and it’s always, candidly, overwhelming to me to have people do that, but I don’t think there’s been anything in particular happen since I landed here,” Christie said, pausing to look at his watch before adding, “about an hour and a half ago.” 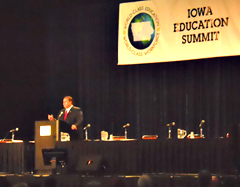 Christie was today’s closing speaker at Governor Branstad’s “Iowa Education Summit” in Des Moines. The New Jersey governor is an advocate of performance-based pay for teachers and favors ending tenure for teachers, too. He told the crowd in Des Moines that the high school graduation rate in the public schools is just 23 percent in New Jersey’s largest city.

“But our children only have one year in each grade and every year that’s wasted is a year they can get back. I don’t think any of us favor that and if we don’t, then maybe we could stop the arguing and the bickering for a little while,” Christie said. “Maybe we could put aside the personal self-interest of unions and politicians and decide to figure out what unites us — and decide to take some risk.”

Listen to Christie’s entire half-hour-long speech about education reform. Christie is giving another speech this evening, at a private fundraiser for Republican Congressman Steve King.