You are here: Home / Politics / Govt / Santorum swipes at Perry over state’s rights

Texas Governor Rick Perry, who is likely to enter the GOP presidential race late this summer, has said New York state — which just legalized gay marriage — has a right to set its own marriage laws because of the 10th amendment. Santorum disagrees.

“I am not, as some in this race have said, o.kay with New York doing what they’re doing,” Santorum said. “What New York did was wrong. I will oppose it and I will go to New York, if necessary, and help overturn it.”

Perry, who is not yet in the race, has said if you believe in state’s rights, you should “stay out of their business” in New York. Santorum says same-sex marriage will “undermine every basic, traditional value” in the country. 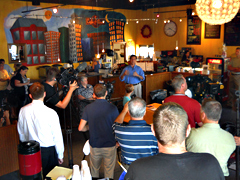 Santorum has just embarked on a 50-city tour of the state. Santorum drove his wife and seven children to Iowa for the trip. However, none of the candidate’s family were along this morning when Santorum visited to a coffee shop in Ankeny.

Audio of Santorum’s remarks in Ankeny.