You are here: Home / News / Boats carry patrons to casino surrounded by floodwaters 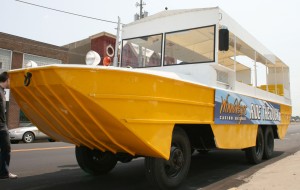 A casino in northwest Iowa is back open, seven weeks after being closed because of the Missouri River flooding. There’s still water surrounding the WinnaVegas Casino near Sloan, but amphibious “duck boats” are now being used to ferry customers over a flooded access road to the casino.

Winnebago Tribe chairman John Blackhawk purchased the two duck boats. He says the idea initially seemed too “far fetched,” but it soon became the only logical solution – other than waiting several months for the floodwaters to recede.

The boat service began Thursday as the casino reopened. Each boat can carry up to 28 passengers. The ride costs $10, but passengers receive a $10 voucher for gambling once they reach the casino.

Blackhawk said while many of the 350 WinnaVegas employees were without work, they helped other residents try to save their property with sandbags. “We’re all impacted by the flooding and our employees know that. They’ve responded in a really good way,” Blackhawk said.

The casino is essentially an island, surrounded by a berm. Blackhawk says the water is shallow enough over the access road that it’s unlikely the boat’s tires will leave the road, so the propellers will not be used.

The Winnebago Tribe of Nebraska operates the WinnaVegas Casino, which opened in 1992.