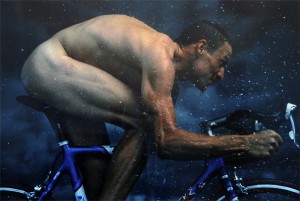 Thousands of cyclists will be crossing the RAGBRAI finish line in Davenport today. If they stop into the Figge Art Museum, they can check out a nude photograph of seven time Tour de France champion Lance Armstrong.

The photo was taken in 1999 by Annie Leibovitz. The museum’s marketing director, Susan Horan, says since Armstrong rode the Tuesday leg of RAGBRAI, she expects the display will get some extra attention this weekend. “You know, it’s unfortunate he couldn’t be here for the whole week. But, we figured we’d bring him to Davenport one way or another. It just happened to be in a photograph,” Horan said.

The photo is on loan to the museum and has been on display for much of the summer. “It’s not life-size, but it’s a fairly large photo. It’s Lance and he’s on the bike and it looks like he is racing through rain, actually. He’s just not wearing any clothes,” Horan said.

The Figge Art Museum will offer free admission this weekend only to celebrate RAGBRAI, the Bix Seven Run and a downtown Davenport street fair. A spokesman for the Quad Cities Visitors Bureau says 100,000 people are expected to visit the city this weekend.