You are here: Home / Business / Workers locked out of Mason City sugar plant 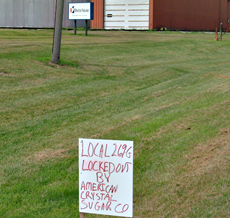 Twenty-three workers at a sugar processing plant in north-central Iowa are among more than 1,200 employees being turned away from entering seven American Crystal Sugar plants in the Upper Midwest.

Guards were posted outside the Mason City plant with some of the workers sitting in the public right of way near the entrance this morning. This locked out worker, who asked not to be identified, is hoping the contract dispute is resolved soon.

“We want to get back to negotiating and get back to work, but until that time, we’ll be out here picketing and hoping things will work out,” the worker said. The union and company remain far apart on several issues. The worker outside the Mason City plant said the company proposed big changes in health insurance, vacations, pensions and overtime wording.

“They wanted to overhaul things that have been in place for 30 years,” the worker said. He stated the union would’ve been content with extending the current contract. American Crystal is the largest beet sugar producer in the U.S. The other six plants are located in North Dakota and Minnesota.

A phone call to a company spokesman to comment about the lockout was not immediately returned.