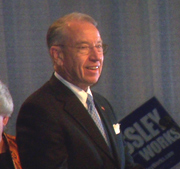 Iowa’s two U.S. Senators today voted against the “debt deal” approved by the U.S. House last night. Senator Chuck Grassley, a Republican, said there were three reasons for his “no” vote.

Grassley says the proposal “delayed meaningful spending reductions” and secondly, it fails to address entitlement spending in a way that will save the programs for future retirees.

He says the entitlement programs are “part of the social fabric of America” and need to be saved, but may need to be changed a little bit.

The final vote in the Senate was 76-24. Grassley says the fact that both he and Democrat Senator Tom Harkin voted against the proposal shows just how far apart both sides are on a solution for debt reduction. 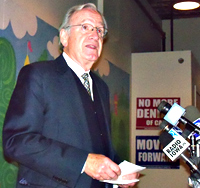 Harkin, called the deal a “clear and present danger” to the country’s “fragile” economy. “To say that this is the wrong policy at the wrong time is a gross understatement,” Harkin said during remarks on the Senate floor.

“You have to ask the question: Is anyone paying attention?” According to Harkin, the deal is “not fair” because it is entirely focused on budget cuts rather than “balanced” with tax increases.

“Please read your history,” Harkin said Monday during his Senate floor speech. “See what happened in 1937 and 1938. We were coming out of the Depression and all of a sudden congress decided to tighten down the screws and plunged us right back into a recession.”

The vote of Iowa’s two senators against the proposal made it a clean sweep of the state delegation as all five congressmen voted “no” in the House.