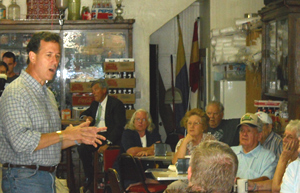 Rick Santorum talks to customers at a shop in Indianola.

“What we needed to focus on from the very beginning…(was) balancing the budget through a balanced budget amendment to the constitution,” Santorum said this morning in Indianola, “very popular in America.”

Santorum, a former congressman and senator from Pennsylvania, said he would have voted against the final plan presented to congress this week. “I would have never made that deal,” he said.

And Santorum is especially critical of presidential candidates Ron Paul, Michele Bachmann and Thaddeus McCotter, three members of congress who are running for president.

“I didn’t see their input at all in this whole process,” Santorum said during an interview with Radio Iowa. “So how can you say you want to be the leaders of the country if you can’t even lead the congress?”

Both Paul, a congressman from Texas, and Bachmann, who represents Minnesota in congress, voted against the debt deal. McCotter — a congressman from Michigan who entered the race in July — voted for it.  Santorum told a crowd at ice cream store in Indianola this morning that Republicans in congress were “not clear in their mission” for this deal.

“We got some spending cuts, a few, and the future spending cuts may be out of defense which I am very much against and there may be tax increases in the future. That does not make me feel very comfortable that we got a deal that was the best deal,” Santorum said. “Why didn’t we get a good deal? Number one: because we didn’t have leadership; we didn’t have a clear message and we didn’t define the terms to the American public from the very beginning.”

Santorum is one of two presidential candidate campaigning in Iowa today. Ron Paul is making stops in Iowa City and Davenport.