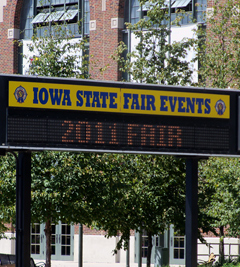 Officials from the Iowa State Fair, Des Moines Police Department and Iowa State Patrol talked today about changes in security for the fair that begins next week.

There were incidents on the first and last weekends of the 2010 fair where people were attacked, and one incident in particular at a nearby convenience store was caught on video. 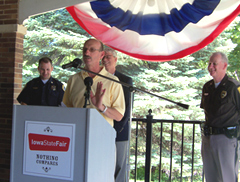 Des Moines police have jurisdiction outside the fair gates and Major Stephen Waymire says their new approach begins with more officers during peak hours and late at night.

He says the second phase is increased visibility so that people walking up to the main gate will see the command post and officers walking all the streets around the fair and the surrounding neighborhoods.

He says they’ll have an additional 10 to 15 officers on duty compared to the 25 they had in the fair area last year. Waymire says they are also working with ambassadors in the neighborhoods around the fairgrounds on the east side of the city. Waymire says those ambassadors have stepped up to work with the police and state patrol to ensure it is a safe fair for everyone.

The Iowa State Patrol handles law enforcement inside the fair gates along with the fair police. Colonel Patrick Hoye says he is adding an extra 10 to 15 troopers and they’ve increased the number of surveillance cameras too. He says they’ve added five additional cameras around the fairgrounds to make about one dozen cameras and the fair police have their own cameras as well.

The incidents gained some national attention after a Des Moines officer put in a report that one attack was something called “Beat Whitey night.” All of the victims in the attacks were white and those charged were black, but Des Moines police later said they found no evidence the statement was true or that the incidents were racially motivated. (2010 fair story)

Iowa State Fair C.E.O., Gary Slater, admitted the adverse publicity from last year’s incidents were what led them to make the changes. 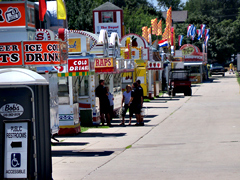 Slater says they did think about it and it is a concern and that is the reason they had the news conference to show they “we have been working on it and we have a plan in place to keep people safe and to make sure everybody knows we have worked on it.”

Slater says the attacks did get a lot of attention. “Those were few and isolated incidents, but…that video has been run time and time and time again, and after so long I guess you could think that it was more than it was on that last Sunday night,” Slater said.

Des Moines Mayor, Frank Cownie, also said the problems were overblown. Cownie say they have nearly one-million people each year that come to the fair and last year there were around 138 arrests for public intoxication and other things during the fair. “So you have less than, what would that be mathematically, about a tenth of one percent of all the people that enter here get in any kind of trouble at all,” Cownie said.

Cownie says the changes will help ensure that any trouble is stopped before it gets out of hand. Cownie says the extra presence in and outside the fair “isn’t so much about showing muscle” it is about having good communication about “real factual information” about what is happening amongst police and the public about what is taking place. The various officials say they’ve met many times since the close of the fair last year to work out the plans for this year.