Republican presidential candidate Herman Cain is hinting anything less than a top three finish at the Ames Straw Poll will cause him to reevaluate his candidacy.

“We’re not going to stop. That’s just the desired place where we would like to finish and that is in the top three,” Cain said, when asked today to explain his declaration. “If we finish fourth or fifth, we are going to evaluate that to determine what the implications are.”

Cain spoke today at an hour-long forum in downtown Des Moines. Cain told the crowd he is in the presidential race to win, not come in second. But Cain said a back-of-the-pack finish at the Straw Poll would not be the “end of the road” for his campaign.

“It’s just going to be a harder analysis to do, to decide if we would go forward,” Cain said. 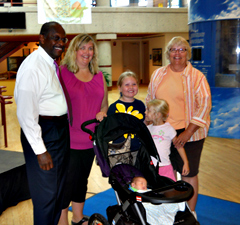 Cain used the word “pathetic” to describe the state of the American economy, and he outlined his call for immediately reducing the top personal and corporate income tax rates to 25 percent, with the ultimate goal of getting rid of the income tax and replacing it with a national sales tax.

“The slide with the Dow today being such a large number is the market’s reaction to the debt deal which didn’t solve the problem of reducing the debt,” Cain said. “…I think it also shows the nervousness of some investors that the rating of the United States credit still could possibly be downgraded.”

Cain, the former CEO of Godfather’s Pizza, is critical of the debt deal congress approved this week, as he argues it won’t resolve the government’s long-term financial problems.