Republican presidential candidate Michele Bachmann is blasting President Obama for celebrating his 50th birthday on the day the stock market took a dive.

“He threw a barbeque last night at the White House to celebrate,” Bachmann said today. “One thing I will guarantee you: President Bachmann will be cancelling barbeques if we see the market go down and if we see the jobs report going down, we will cancel it.”

Data released this morning indicates about 117,000 jobs were added to the U.S. economy in July and the nation’s unemployment rate dipped a tenth-of-a-percent. Bachmann said that’s “not enough” and the president’s economic policies are to blame.

“The president has been in his job for now over two-going-on-three-years. Has he said done what he was going to do?” Bachmann asked a crowd in Newton early this afternoon. “Has he delivered?”

Many in the crowd replied, “No,” to Bachman’s questions. 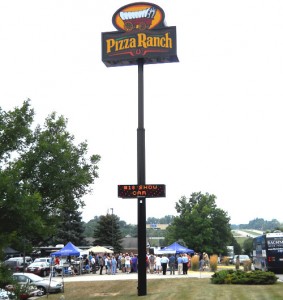 Bachmann spoke for about half an hour in the parking lot of a Pizza Ranch to about a hundred people. Bachmann, who is a member of congress, bragged about voting “not once…but four times” against the bill that raised the country’s debt limit.

There were two competing events in the Pizza Ranch parking lot this afternoon.  Many people came to meet and get an autograph from race car driver Michael McDowell.  The 26-year-old drives the Pizza Ranch car, which will compete in a weekend races at the Iowa Speedway in Newton. After Bachmann finished her campaign event in the parking lot, she walked over to the car and driver, saying NASCAR fans “are our people.”

Listen to the Audio of Bachmann’s half hour speech.