You are here: Home / Education / Spacecraft “Juno” ready for launch with UI gear onboard 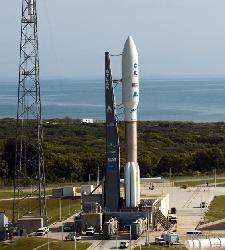 There’s a little bit of Iowa on board the spacecraft that’s scheduled to launch this morning from Florida’s Cape Canaveral, bound for the planet Jupiter. (The launch window opens at 10:34 AM/Central.)

In Roman mythology, Juno was the wife of the god Jupiter — and Juno’s the name of the four-ton craft that’ll carry nine experiments 390-million miles to our solar system’s largest planet.

University of Iowa physics professor Don Gurnett helped design and build one of the experiments, an instrument called Juno Waves. It will test plasma and radio waves emanating from Jupiter’s magnetosphere.

Gurnett says, “The objective of the mission really is to study the interior of Jupiter and the radio emissions have a lot to do with the magnetic field structure, which tells us things about the interior.”

It will take Juno five years to reach Jupiter — Gurnett says it’s due there July 5th of 2016. Instead of circling the equator, Juno will be the first spacecraft to go into a polar orbit around Jupiter.

It will make 33 orbits over a year’s time before descending into the planet’s hostile atmosphere, beaming back a host of readings as it falls.

While five years may seem like a very long time to wait to see if their hard work will pay off, Gurnett says he and his team are patient.

“We’ve been used to that,” Gurnett says. “We’ve had a lot of missions that go out to these planets, like the Cassini spacecraft went to Saturn and took seven years to get there. We’re getting data back from Cassini right now, for example, so we’ve got other things to work on while we’re waiting for the spacecraft to get there.” 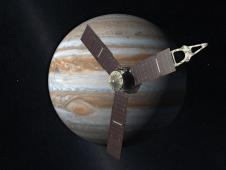 Jupiter is the fifth planet from our sun and it’s, by far, the largest. Gurnett says if it had been a little larger, Jupiter would have been a star and our solar system would have had two suns.

The planet, known as a gas giant, is covered in thick clouds which he says have always enshrouded Jupiter in mystery.

“For example, the deep interior is believed to be liquid metallic hydrogen which, it’s such a high pressure in the interior, you can’t even make that on the Earth,” Gurnett says. “There are a lot of unknown aspects about Jupiter that we hope to study.”

Juno Waves will be the seventh U-of-I instrument to fly to Jupiter, following previous devices carried aboard Galileo, Pioneers 10 and 11, Voyagers 1 and 2, and Cassini, which is still in orbit around Saturn.

Gurnett is one of the U-of-I’s foremost space researchers and is among the world’s top experts in the field of space plasma physics. The 71-year-old says he has no plans to retire and he intends to still be in his Iowa City office in the summer of 2016, waiting for Juno to phone home.