You are here: Home / Politics / Govt / Straw Poll could be “make or break” for some candidates 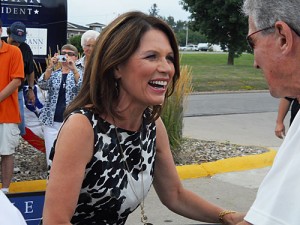 There is a frenetic week of political activity ahead in Iowa.

A nationally televised debate among Republican presidential candidates will be held in Iowa on Thursday. At least nine candidates plan to visit the Iowa State Fair on Thursday and Friday. Then, on Saturday, the Iowa Republican Party will hold its Straw Poll.

Six candidates have spent campaign cash to participate in the event and, in some cases, literally drive supporters to the Straw Poll voting site in Ames in rented buses. Texas Congressman Ron Paul has said anything less than a third-place finish would be a disappointment. He has suggested the Straw Poll may be the end of the road for some of his competitors.

“Since you get so much attention, it can make or break some people in campaigning,” Paul said recently at an event in Ames.

Last week, former Godfather’s CEO Herman Cain was asked whether he has to win the Straw Poll.

“No, I don’t believe that I have to win the Straw Poll,” Cain said during a forum sponsored by the Greater Des Moines Chamber of Commerce and IowaPolitics.com. “But I do believe that I need to finish in the top three.”

Other candidates have been downplaying the significance of a top-tier Straw Poll finish.  Minnesota Congresswoman Michele Bachmann has used the term “underdog” to describe her chances.

“Obviously we want to do as well as we possibly can,” Bachmann said Friday during a  news conference in Newton. “We’re at a disadvantage in that we’ve only been running and putting our plan in effect for two months here in Iowa. Other candidates have been here two years or more, and so we’ve at a distinct disadvantage from an organizational standpoint, but the response that we’ve had from Iowans has been overwhelming.”

Former Minnesota Congressman Tim Pawlenty hasn’t publicly suggested he needs to win the Straw Poll either, but he’s been urging Iowans to select a candidate who does more than give “fiery speeches”, but one who can beat President Obama in 2012.

“Barack Obama is ripe for the picking,” Pawlenty said Friday night in Tiffin.  “In fact, I would say, politically, you could just about stick a fork in him because it’s over for him.”

Former Pennsylvania Senator Rick Santorum has taken many swipes at Obama, too, but his most bitter barbs are targeted at the media.

“The national media’s missing the boat,” Santorum said during an appearance at a coffee shop in Ankeny. “They’re missing what is really moving things here on the ground when people are exposed to the candidates, where do they end up migrating as opposed to what the experts when they sit there in their ivory towers, choosing who the profile of the right candidate is to beat Barack Obama.”

Santorum, Pawlenty, Bachmann and Cain all are campaigning in Iowa on Monday.

Former Massachusetts Governor Mitt Romney arrives in central Iowa in the middle of the week, his second trip to the state this year. Former Utah Governor Jon Huntsman, a GOP presidential candidate who is employing a “skip Iowa” strategy, is due to make his first and likely only Iowa appearance later this week, at the televised debate co-sponsored by the Iowa Republican Party and the FOX News Channel.