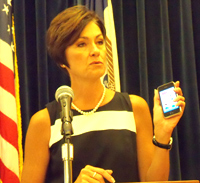 Reynolds says it’s part of an ongoing upgrade of state websites. Reynolds says the governor signed an executive order earlier to work on web standardization and assigned a committee to do that.

She says the committee is making significant progress and will make a recommendation in the near future to put “sliver headers” on all state websites to make them more recognizable.

Reynolds says the state’s main website is getting a makeover. She says a new Iowa.gov is being developed and new standards for all state websites will be discussed as they continue to try and to look for ways to use technology to make it easier to access government.

Traci Smith of the Iowa Interactive company designed the mobile fair website. Smith says they wanted to make sure that you didn’t go to the fair and then find out something the next day that you missed, so she says the site puts everything at the touch of your fingertip.

Smith showed off the site during the governor’s weekly meeting with the media. Smith says they have big and friendly icons that are easy to use on the phone and you can organize your time by looking at the most recent information on the fair schedule.

The site also includes a map and a listing of all the foods you can buy at the fair. You can access the mobile fair website at: mobile.iowastatefair.org. The fair opens on Thursday.