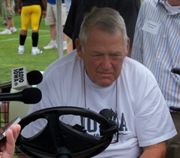 Iowa defensive coordinator Norm Parker drew another crowd around his golf cart as he arrived for the 2011 media day. Parker fought medical issues all last season including the amputation of one leg. He says he is doing well.

Parker says he is learning how to walk and climb stairs and do things that he once thought were easy and thing he used to take for granted. The coach got a lot of attention as he missed some time with the team and says the continued attention about his health is uncomfortable.

He says it makes him embarrassed, although he appreciates the interest, he says “you don’t have to be over at that hospital very long to find out that there’s a whole bunch of people who have more problems than you have.” Parker says his problems are “a minor thing” compared to what others are going through.

When it comes to the defense, Parker believes they’ll be able to fill the holes from the players who have moved on. Parker says they lost a lot of players, but he thinks they’ll be good, as he says they have some good young kids who will get their turn to play now. Several new players will be vying for time in the secondary and some will change position. Parker says they’re just trying to find the set up that works the best.

He says the whole idea is getting the best four players on the field, and that make take some moving around of positions, but they’ll get the best four out there. One defensive player who was rushed into service by injuries last year was James Morris. The former Solon prep enters his sophomore year with more experience. 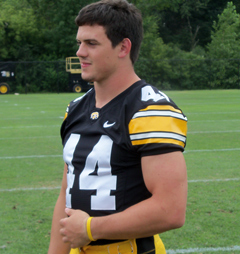 Morris says he came into camp last year “knowing nothing” and this year he knows the schemes and what they’re trying to do and has a lot more confidence. Most players get to sit back and learn their freshman year before being thrown into the action, but Morris says everything worked out for the best.

“I guess looking back, I wouldn’t have it any other way,” Morris said. He says everyone wants to play and he says he wanted to play, even though some might have said he wasn’t ready. He says there is pressure, but you have to deal with it individually in the best way you can. Morris says the fall workouts are a key for players to get ready, whether they are a veteran or a newcomer.

Morris says it takes work to develop timing and the best fits for players and that is why it is so important. Morris played in 13 games last season, and started six of them at the middle linebacker spot. Iowa opens the new season September third at home against Tennessee Tech.