A pair of Republican presidential candidates took shots at President Obama at separate stops in north-central Iowa. Herman Cain told a group of about 100 people in Clear Lake that his “common sense” approach is what’s needed in Washington.

Cain said the decision by the Federal Reserve to keep interest rates the same for the next two years shows the Fed thinks President Obama’s economic policies have failed. “The economic engine of this economy is the business sector and not one policy, one idea, one program has come out of this president and this administration that’s going to put fuel in that economic engine. The Federal Reserve has just acknowledged it,” Cain said. The former C.E.O. of Godfather’s Pizza again pitched his call to eliminate the tax on capital gains as a way to turn around the economy. 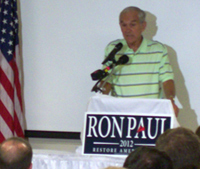 Another G.O.P. presidential candidate, Ron Paul, was joined by his son, Senator Rand Paul, during a campaign stop in Mason City. Rand Paul said the stock market has given “a vote of no confidence” to both President Obama and Treasury Secretary Timothy Geithner.

“I think we now have a failed presidency. I think now have a secretary of treasury who should resign. Nothing is going right in the country.

The stock market is plummeting, unemployment is nearly 10-percent, gas prices have doubled and food prices are high,” Paul said. Ron Paul echoed many of his son’s concerns, but also discussed the newest candidate in the field of Republican candidates.

Paul said fellow Texan Rick Perry’s entry into the presidential race will not hurt his campaign. “As one who does not profess to be the greatest political analyst, I would say it will probably help us because (Perry) will just further dilute the establishment vote. He’s part of the status quo. I don’t know of a view that he has that is different than the previous administrations. His record as a governor does not show him as a standout, as actually being a conservative,” Paul said.

Perry is expected to formally declare his bid for the White House this weekend. The Texas Governor will speak at a GOP fundraiser in Waterloo on Sunday.