Republican presidential candidate Mitt Romney says he’d like to do “darned well” in the 2012 Iowa Caucuses. Romney landed in Iowa Wednesday and visited for an hour with a group of business executives in Pella, emphasizing his 25-year career in the business world.

“I happen to think that right now, given the priorities of this nation which are to get the economy back on track, to balance our budget and to live by the principles that made America such a great nation, that I’m the right guy for that job,” Romney said during a news conference in Pella, “and I think the people of Iowa will agree.”

Romney finished second in the 2008 Iowa Caucuses and most polls show him as the 2012 front-runner. Romney said he’ll campaign “plenty” in Iowa over the next few months.

“I’ll be participating in the Iowa Caucus process, hoping to win the delegates that I’d like to have to win the nomination and I’ll be, if I’m the nominee, aggressively campaigning,” Romney said. “Iowa will be a swing state. I don’t think the president will win it. I think I’ll win it if I’m the nominee.” 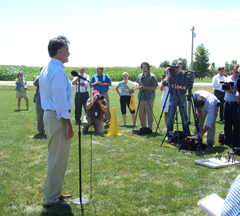 Romney told reporters President Obama isn’t “up to the task” of leading the country during an economic crisis.

During a roundtable discussion in Clive, which is a Des Moines suburb, Bachmann said the “smart thing” for the country to do is to “turn the ship” of state around with a new president, rather than see the economy sink like the Titanic.

Both Bachmann and Romney will visit the Iowa State Fair tomorrow before sharing the stage with six other presidential candidates who will gather in Ames tomorrow night for a two-hour debate.