You are here: Home / Sports / Coker uses mistakes as motivation for upcoming season 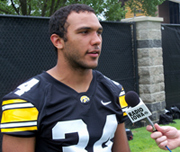 Iowa runningback Marcus Coker capped the 2010 season by rushing for 219 yards and two touchdowns in the bowl game win over Missouri, but the sophomore says that game isn’t the one he focuses on the most.

Coker says the game he remembers most is the one against Minnesota, and that’s the one he uses for motivation. Coker had a costly fumble in the Minnesota game and he says that and other mistakes the team made in the loss is something he wants to avoid.

He says he feels there were a lot missed opportunities for him personally and as a team. “We’ve been working hard so things like that don’t happen again,” Coker says. With Coker the top back going into the fall, the goal is to find the player or players to back him up. Coker is confident he’ll have plenty of support.

Coker says the other backs are all physically able, it’s just a matter of getting them used to the offense and the speed of the game. Coker rushed for 622 yards last season and scored three touchdowns after returning from an injury in fall practice. 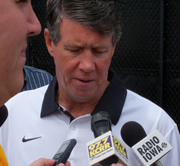 Hawkeye offensive coordinator, Ken O’Keefe, jokes about Coker’s stepping in to play in his first year. He says Coker is another in a “long line of freshman runningbacks that we continue to use.”

O’Keefe says runningbacks coach Lester Erb does a great job in getting the backs ready. O’Keefe says Coker has continued to improve the more he practices and plays.

O’Keefe says Coker is physically bigger and stronger and has more of the system under his belt and he works hard and it’s important for Coker to do well.

“And we’re excited about having him out there,” OKeefe says. Iowa opens the season at home against Tennessee Tech on September third.