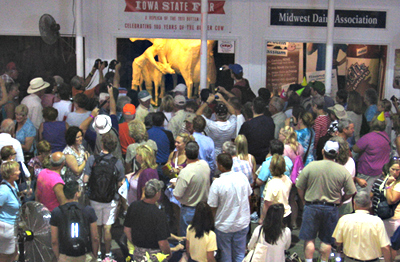 People gather around to see the special butter sculpture at the Iowa State Fair.

A massive sculpture made of more than 1,200 pounds of butter was unveiled this morning as part of the opening ceremonies for the 2011 Iowa State Fair in Des Moines. It’s located in the Ag Building near the famous life-sized butter cow which has now been part of the Fair for 100 years.

The Fair’s “butter cow lady,” Sarah Pratt, also created the surprise sculpture which includes a cow and a young boy teaching a calf to nurse. It’s placed on a turntable so the entire sculpture rotates 360 degrees. 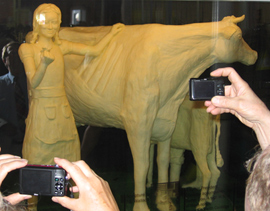 “Some people might know, but I’ll let out the secret, the other cow isn’t completely finished all the way around. It’s only finished on the parts that you can see from outside. So, I was excited to be able to do a sculpture that everyone could see from all sides,” Pratt said.

The sculpture, located behind glass in a 42-degree cooler, pays tribute to Norma “Duffy” Lyon – who served as the Fair’s “butter cow lady” for 45 years. Lyon passed away earlier this year at the age of 81. Pratt says she was inspired by a story about how Norma met her husband Joe. Their first meeting involved a minor argument about Norma chasing a butterfly. The sculpture includes a young Norma Lyon with a butterfly in her hand.

“To me, it signifies her curious spirit and her love of all living things. But also, just that spirit that embodies the Fair of curiosity and learning and exploring,” Pratt said. “So, I hope when people are on the fairgrounds and they see a butterfly they might remember Norma.”

The 34-year-old Pratt, who’s from Norwalk, learned the art of butter sculpting from Lyon and took over the role of the Fair’s “butter cow lady” in 2006. She spent three weeks working on the sculpture revealed this morning.

“Because it rotates and people can see it from all different angles, there was a lot of consideration taken into all the angles. And because it was all done in secrecy, it made it difficult to come outside and view the sculpture,” Pratt said. “Now that I can see it from outside, I think there are some things I might go in and fix up a little bit.”

A long line of people stretched throughout the Ag Building this morning as fairgoers waited to see the butter cow and Pratt’s sculpture of Lyon. The Iowa State Fair runs through August 21.