You are here: Home / Human Interest / 90-year-old twins back at State Fair to sell sandwiches (audio) 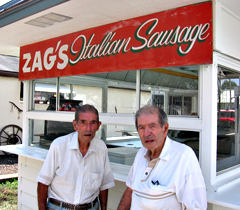 Robert and Leo Zagnoli of Des Moines are 90-year-old twins and owners of Zag’s Italian Sausage stand on the fairgrounds. They were just 11 when a neighbor asked them to help out at his food stand at the 1921 Iowa State Fair.

Several years later, Robert said he and his brother decided to get their own stand and they’ve rarely missed a Fair since. “We missed (Fairs) during World War Two when we were both in the service and I was called back to serve during the Korean War, but my brother carried on (working at the Fair),” Robert said.

The Zagnolis hire help to operate their food stand, but both were on the fairgrounds this week making sure everything was in working order. Robert says there’s a simple reason why he and his twin brother keep coming back to the Fair. “We enjoy the Fair. We see a lot of people who we never see…other than now. We just look forward to coming out here,” Robert said.

The Zagnoli brothers, who come from a family of nine children, are still sharp salesmen. They’re quick to point out that they haven’t changed prices on their menu for several years. Their stand features a sandwich of Italian sausage that’s simmered in a marinara sauce and served with green peppers, onions and a slice of mozzarella.