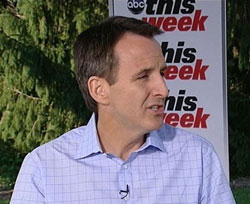 Pawlenty made the announcement himself on ABC’s Sunday morning program “This Week”.

“We needed to get some lift to continue on and to have a pathway forward,” Pawlenty said.  “That didn’t happen…so I’m going to be ending my campaign for president.”

Pawlenty called his finish in the Straw Poll “disappointing.

“This has been an incredible process. It’s been a great honor for Mary and me and our team to convey the message of trying to get this country back on track — and I think it is off track — but bringing my record forward as the two-term governor of a blue state,” Pawlenty said on ABC. “…But obviously that message didn’t get the kind of traction or lift that we had needed and hoped for coming out of the Ames Straw Poll.”

Pawlenty had hired a team of veteran Iowa political organizers with experience on the 2008 campaigns of both John McCain and Mike Huckabee. Huckabee’s daughter, Sarah Huckabee Saunders, worked on the Pawlenty campaign in the weeks leading up to this weekend’s Straw Poll. According to Pawlenty, the “audience” is looking for “something different” for 2012.

“I wish it would have been different, but obviously the pathway forward for me doesn’t really exist,” Pawlenty said, “and so we’re going to end the campaign.”

Former Massachusetts Governor Mitt Romney, the perceived front-runner in the 2012 race, issued a statement praising Pawlenty for running an “honorable campaign.”  Fellow Minnesotan Michele Bachmann, the winner of Saturday’s Straw Poll, expressed her “respect and admiration” for Pawlenty in a written statement, saying he “brought an important voice” into the campaign conversation.

Bachmann will be in Waterloo tonight, speaking at an event along with Texas Governor Rick Perry, the latest candidate to enter the GOP race.  Former Pennsylvania Senator Rick Santorum, the fourth-place finisher in Saturday’s Straw Poll, announced this morning that he, too, plans to attend the same Black Hawk County GOP fundraiser in Waterloo as the other two candidates.