You are here: Home / Politics / Govt / Branstad congratulates Bachman, has breakfast with Perry 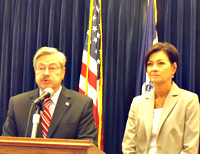 Governor Terry Branstad and Lieutenant Governor Kim Reynolds at their weekly meeting with the media.

Governor Terry Branstad says he is pleased with the turnout and the way the Republican Straw Poll went this weekend. Branstad congratulated Michele Bachman for winning the poll and says she did a great job of turning out the votes in only 48 days.

Branstad also said he had breakfast with Texas governor Rick Perry, who did not participate in the straw poll, but announced he is running for president. “He’s going to be at the fair today and he’s also aggressively and actively campaigning here in Iowa,” Branstad said,”so I think we’re gonna have a very hotly contested Iowa Caucus.”

Branstad was asked if Perry’s campaign for the Iowa Caucuses will be full out or a token effort. “Yes, he will compete, compete,” Branstad says. He says Perry’s stop in Waterloo Sunday showed his is doing the right thing by “working the room” and staying late and talking with everyone, answering questions. “And he’s focusing on the things that are important, restoring fiscal responsibility and jobs,” Branstad says.

Branstad says he talked with Perry about the death of the Iowan was a Navy SEAL to ag issues, and other things important to both states.

He says they talked about reducing taxes and the regulatory, as it’s something he has done in Texas and Branstad says he wants to do in Iowa.

“You know, I think he’s king of a new exciting entry into the race, but not to detract from the other candidates that have been here before and have worked hard,” Branstad said. He says medical tort reform was a another key issue he discussed with Perry.

Branstad says Texas used to have trouble bringing in new doctors, but he says that has changed dramatically since they instituted tort reform. Branstad says while Perry’s entry changes the presidential race heading toward the caucuses, there’s still a lot of campaigning to do.

“I think it is very much a wide open race, it’s no doubt that nationwide (Mitt) Romney is the frontrunner, but I think he needs to come and actively compete here in Iowa,” Branstad says. He says after the Iowa Caucuses, the president field is narrowed and if you don’t do well here, that can hurt you in New Hampshire and elswhere.

Branstad was asked if his candidate did well in the straw poll, he laughed and said he wouldn’t say as he wants to be open to all the candidates.