You are here: Home / Sports / Zusevics adds some new language to Iowa practices

Colorful language on the football field isn’t something that’s unheard of, but an Iowa Hawkeye lineman sometimes takes the language to another level with his teammates. Radio Iowa’s Dar Danielson reports: Zusevics story :60 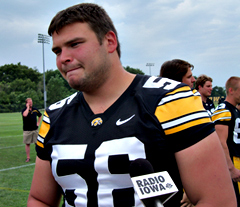 Text version of the story:
Senior offensive tackle Markus Zusevics’ grandparents fled Latvia to the U.S. after the Soviets took control of the country. He says it was a bad situation when the communists took over the country, so his grandparents fled. While he was born in the U.S. and grew up in Illinois, he has kept in touch with his roots.

That includes speaking Latvian, which he sometimes uses in practice to mess with teammates. He says the heritage is something to be proud of because not many people left the country. Zusevics says Latvia is now free and a lot different than when his grandparents fled. He has been back with them to see where they grew up, and is pleased to be able to continue that connection.

While his teammates may be confused when Zusevics speaks Latvian, he says their years of working together will be a key to their success this year with a new starting quarterback and a young runningback. He says they are the most experienced group and they want to lead the offense, but they also have confidence in the others on offense. He says the biggest key is using the right technique.

Zusevics says they have to be detailed in everything they do as well as recognizing the defenses and blitzes and performing at a high level. Zusevics is a 6-5 300-pounder listed as the starting right tackle on the fall depth chart.