You are here: Home / Human Interest / Man given award for rescue of woman, daughter

A young woman from Centerville says she and her two-year-old daughter are alive today because of the heroic acts of a stranger.

Twenty-two-year-old Samantha Shondel and her daughter Georgia were rescued from a burning home in January of this year by 32-year-old Bobby Heriford.

“My girlfriend and I were going to the gas station to get something to eat on my way to work and it’s really crazy, because I never go that way, it’s totally out of my way. As we were pulling away, she saw flames inside a house,” Heriford said.

He was one of 26 Iowans honored at the Iowa State Fair today during the Governor’s Lifesaving Awards ceremony. Heriford recalled the morning of January 27 and his call to 911.

“As I was on the phone, I saw a silhouette of a little girl in the window. That’s when I just ran out of the vehicle and up to the door,” Heriford said. “When I got to the door, I could hear Samantha screaming. I just kept kicking the door until it flew in…Samantha came running out and I ran in, grabbed Georgia and brought her outside.” 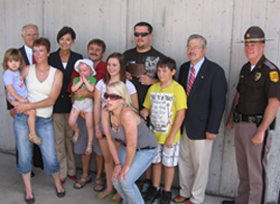 The Shondel family with Governor Branstad.

Samantha and Georgia were rushed to the hospital with third-degree burns over 25% of their bodies.

Hope Shondel, Samantha’s mother, says her daughter has “pretty much fully recovered.” Georgia, meanwhile, is still recovering and has scars across her face and body.

“The doctors are talking about some more surgeries to correct some of the scarring and burn tissue. So, we still have a long road to go,” Shondel said.

The entire Shondel family, including Samantha and Georgia, attended today’s ceremony and cheered as Heriford was introduced and received his award.

Hope says her family is now “very close” with Heriford, although they did not know him before the fire. “Nope, we didn’t know him. It’s kind of a fluke that he went that way to work that morning…somebody was looking out (for us),” Shondel said. The fire, which was caused by an electrical problem in the attic, destroyed the Shondel’s home and all their belongings. Samantha has another daughter, Virginia, who’s the twin sister of Georgia.

Heriford, who works at Iowa Steel and Wire in Centerville, escaped the fire with only singed hair and blisters on his face.