Hailstones as large as baseballs shattered windshields and dimpled hoods, trunks and roofs. Jim Champion runs a body shop in Omaha/Council Bluffs and says if your vehicle’s windows were blown out and the interior got drenched, you’d better get that moisture out quickly.

“If it’s allowed to stay inside there and the soaked carpets, it’s going to get mildew and mold and it is going to stink to high heaven,” he says. Customers were already lined up waiting for estimates this morning when he arrived at work. In addition to the broken windows and wet upholstery, Champion says there is a possibility electronic parts that run under the floorboards could be damaged, too. 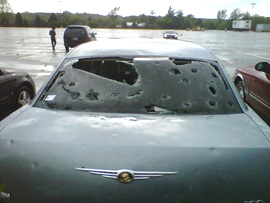 “There maybe parts underneath the seats that if you get that moisture out of there right away, they might be okay,” he says. Champion says getting rid of the water-damaged parts and carpet will help to avoid the mold and mildew.

He says, “The longer you wait with that moisture underneath there, you increase the chances of damaging more parts.”

Champion says even if your car has minor interior damage, it’s a good idea to have it checked to see if repairs are necessary or if it can be cleaned.

The Iowa D.N.R. says the Lake of Three Fires State Park, in Taylor County, was damaged by the storm. The says golf ball sized hail that striped trees by the lake nearly bare and they were damaged to the extent that the roads to the picnic areas are impassable.

Waubonsie, Viking Lake and Lake Manawa state parks also sustained damage, but not to the extent of Lake of Three Fires.

Photos and story from  Karla James.