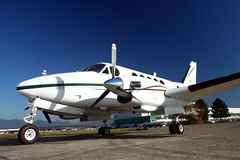 While many hospitals use helicopters to bring patients in quickly, a hospital in the Council Bluffs area is switching to an airplane for certain circumstances.

Dr. Rob Chaplin is medical director of the children’s transport service at Children’s Hospital and Medical Center in Omaha. He says the twin-engine King Air 100 airplane extends their ability to reach ill children and transport them to the hospital.

“With the helicopter, the range is about 150 miles, on average, and with the new aircraft, our range will be about a thousand miles,” Dr. Chaplin says. The transport service will now cover all of Nebraska, central and western Iowa and parts of South Dakota, Minnesota, Missouri and Kansas.

“We are expecting to be busy,” Chaplin says. “This is a service that no one else provides in this part of the country, especially for pediatrics. The closest being probably Children’s Mercy in Kansas City and then Denver Children’s out in Denver.” He says more physicians are seeing the advantage of having a dedicated pediatric team that can now take to the air to transport very ill children to the specialists in Omaha.

“It is equipped with the same equipment that we would carry on the ground or in the helicopter,” Chaplin says. “We have all of the medical equipment that we bring along. We have the ability to perform any of the procedures that we could essentially anywhere else in the state we can now do in the aircraft as well.” The Critical Care Transport’s first flight was to Kearney (CAR-nee), Nebraska, last week.