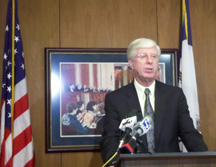 An Iowa-based group known for its opposition to large-scale livestock confinements is raising a stink about the way Iowa Attorney General Tom Miller and the Obama Administration are handling an investigation of big banks.

“It leaves a void at the table for a voice that’s really calling for a settlement that’s as tough as possible, really cracks down on the big banks, really pushes hard for principle reduction without giving up any chance for future prosecution,” Neubert says.

Introducing the “threat” of criminal prosecution as leverage in the negotiations would be “illegal and unethical” according to Geoff Greenwood, a spokesman for Miller.  Greenwood says the case is about holding the banks accountable and helping homeowners.

Iowa Citizens for Community Improvement accuses Miller of letting down Iowans who’re fighting an unjust foreclosure on their home. The group also accuses the Obama Administration of trying to let big banks off the hook.

“It looks to me like they just want this to be wrapped up so they can move on,” Neubert says. “When the fact is these fundamental problems and the (housing) crisis and the things that have been going on for years now have not been adequately addressed by the Obama Administration.”

The New York attorney general and several other state attorneys general have vowed to oppose a multi-state settlement that would protect the mortgage banks from state investigations. Bank of America, Citigroup, JPMorgan Chase, Wells Fargo, and GMAC hold nearly 60 percent of all U.S. home mortgages.

New York and other states are also investigating firms which bundled home mortgages and sold them in the securities market.