You are here: Home / Crime / Courts / Long recovery ahead for Des Moines officer after accident 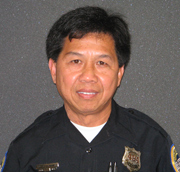 A Des Moines police officer faces a long road to recovery after he was hit by a pickup truck while directing traffic outside the Iowa State Fair late last Friday night.

“He’s had a few different surgeries, but yet he remains in critical condition,” Scott said. A police report released Tuesday claims the pickup truck’s driver, Keith Terry of Belews Creek, North Carolina, ran a red light and had a blood alcohol level of .264 – more than three times the legal limit.

There report also shows why Tran was so seriously injured. It indicates Tran, after being hit, was thrown 47 feet before he came to rest on the pavement. There were dozens of witnesses to the incident as people exited the Iowa State Fair’s main gate at East 30th Street and Grand Avenue.

Scott says investigators have not been able to determine how fast the pickup was traveling, primarily because there were no skid marks at the scene. “Typically, we can use formulas to figure out the speed of a vehicle by use of skid marks and other evidence left at the scene,” Scott explained.

“Without any breaks, it kind of implies that the person was accelerating or maintaining their speed at the time of the collision, which is absolutely tragic for this officer.”

The 52-year-old Tran is a 29-year veteran of the Des Moines Police Department. Terry is charged with operating while intoxicated and serious injury by vehicle. He remains in the Polk County Jail.