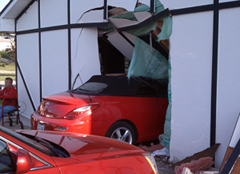 A car crashed into the side of the Danish Inn restaurant in Elk Horn.

Dinnertime at a popular restaurant in the Shelby County community of Elk Horn was disrupted Thursday evening when a car crashed into the building, injuring three people.

The Shelby County Sheriff’s Office says a 2007 Toyota driven by 66-year-old Patricia Miller, of Harlan, went out of control at around 5:40 P.M.  as Miller was attempting to park her car outside the Danish Inn.

Vern Kline owner of the Danish Inn, says it was a normal night, when all of the sudden there was a crash.

Kline said he heard a loud noise and turned to see a red car crashing into the north side of the building. He says three people were knocked to the ground.

The car entered past the driver’s side door into the structure. Kline said there were two people in the vehicle. He said they appeared to be fine, but three patrons in the restaurant were injured — two women and a man.

The extent of their injuries was not immediately known, but Kline says they were taken away on stretchers. One of the patrons was almost directly in front of the vehicle at a table when it crashed. Two others were seated off to the side. None of the restaurant’s staff were injured.

A front seat passenger in the car, 68-year-old Larry Miller, of Harlan, was also injured. The restaurant patrons who were injured have been identified as 62-year-old Richard Clough, 63-year-old Sandra Clough, and 87-year-old Jim Tyler, all from Atlantic.

The restaurant, which sustained about $2,500 damage, was closed for the rest of the evening. Kline said he and his staff were still in shock, and it remained uncertain when the establishment would reopen. The car sustained $3,000 damage. 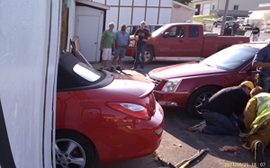