Perry, the governor of oil-rich Texas, opposes the federal “renewable fuels standard” which requires a certain amount of corn-based ethanol be produced in the U.S. each year. 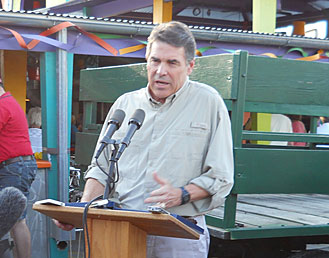 “I’d like to see a level playing field for all of the energy producers in this country,” Perry told reporters in Iowa tonight.

“We don’t need to have government picking winners and losers in this business,” Perry said during a news conference in Des Moines. “Let the folks get out there with the regulations off their back. I have a good idea that the farmers in Iowa can compete with anybody in the world.”

Perry’s view on ethanol is echoed by many “Tea Party” activists who have complained about tax breaks for ethanol and other industries and who have harshly criticized federal bail-outs for Wall Street and American automakers.  Ethanol producers say they’re willing to give up their federal subsidies if federal tax advantages for the oil industry are abolished, too.