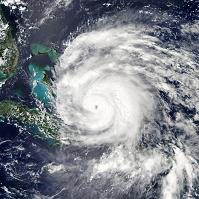 Utility workers and Red Cross volunteers from Iowa are fanned out across the East Coast helping communities and individuals recover from the weekend strike by Hurricane Irene.

“They did such a better job than the federal government did in Katrina. This does show there’s been some learning.” Hurricane Irene left left four-million homes without power and killed at least 21 people in eight states.

“You also found the local utilities and other service companies making decisions earlier and anticipating what could happen.” Des Moines-based MidAmerican Energy dispatched 140 electrical workers and tree and line contractors to the East Coast while Red Cross workers and volunteers from several Iowa chapters are also on duty there. Many of the Iowans left the state late last week, preparing for the worst.

“You found a great deal of overprecaution,” Grassley says. “I don’t use the word ‘overprecaution’ to be controversial. I say it’s a lesson learned from Katrina when nobody listened to the dangers that were being forecast for Katrina.” By contrast to Irene, Hurricane Katrina claimed more than 1,800 lives and caused $81-billion damage.

Katrina made landfall on August 29th, 2005, six years ago today.