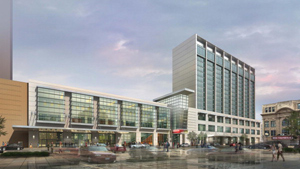 The Convention Complex is a $75 million undertaking, with $50 million coming from state and federal grants. Cedar Rapids Mayor Ron Corbett says the complex will be an economic “shot in the arm” for downtown.

“There’s going to be a 35 million dollar impact on Cedar Rapids on an annual basis as over 375 thousand visitors are coming to Cedar Rapids for various concerts, events and conventions,” Corbett said.

The complex won’t be completed for another year and a half, but it already has at least one tenant on board. The city’s first arena football team, the Cedar Rapids Titans, will play their inaugural season this spring at a local ice arena before moving into the new complex in 2013. And that’s not all, according to Corbett.

“We’ve already booked conventions and events here at the facility before it’s even opened. So there’s just a tremendous interest in Cedar Rapids and this facility. Things that we would maybe have never been able to give to this city, like an indoor football league, now we have a shot at,” Corbett said.