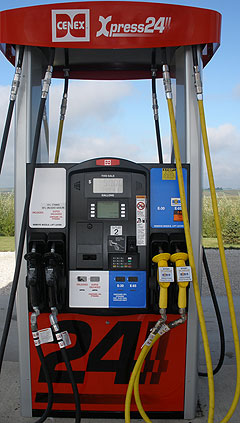 The Iowa Renewable Fuels Association says Iowans used more gas blended with 85% corn-based ethanol in the second quarter of this year than ever before. Association executive director, Monte Shaw, says the sales from April to June were encouraging.

Shaw says Iowans pumped nearly 3.7-million gallons of E-85 into their gas tanks, which was an all-time high for the state. Shaw says the price of the highest blend of ethanol available is the reason for the increase.

Shaw says there were large spreads between the price of E-85 and gas with less or no ethanol and people saw a way to save some money. He says the price spread between the fuels has narrowed, but he says it is still a good bargain, it helps Iowan farmers and cuts our dependence on foreign oil.

Shaw says the price difference between E-85 and other fuels was close to one dollar a gallon at one point. He says the price of E-85 follows the wholesale price of ethanol and gasoline, and at one point ethanol was “really, really cheap” compared to gasoline. Iowa has 144 retail outlets that offer E-85 out of some three-thousand, and Shaw says they continue working to make E-85 more available.

Shaw says retailers are increasingly wanting to put in blender pumps that can offer zero ethanol all the way up to E-85. He says that allows retailers to give consumers a choice of fuel based on their mileage and cost savings. Shaw says they have grants available to help retailers who are interested in adding blender or E-85 pumps.